While my fans rave about their TerryBRICK walls, I had to test the market a little before going all out with my licensee idea. The 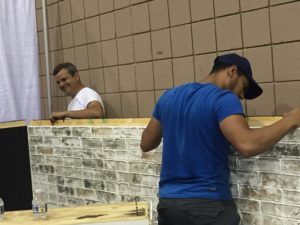 demand is there, but do people want to learn how to do it?

So…my team and I participated in the Great American Franchise Show in Atlanta on May 18 and 19. First off – the show organizers were great. Well organized and responsive. The people we had talked with on the phone were there to help us get settled into our booth. Abel made sure all the exhibitors were satisfied.

As far as the booth goes, my usual obsessiveness with detail paid off. Ours was one of the best-looking booths at the show! Of course, my wall of TerryBRICK helped. We set up the booth early, as I wasn’t sure how long it would take us. Thanks so much to Everton, who’s been my right-hand man for 15 years, and his pal Leonardo, who did the heavy lifting. Literally. My marketing director, Mary, and I made it look “pretty,” and did the touch ups. 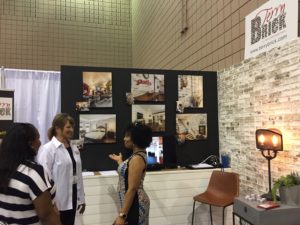 We were in the front of the hall and got a lot of traffic. People wanted to touch and feel the “brick.” Not sure how many times we said, “Two days. Yes, really.” Or “It’s NOT a stencil or mold, but hand drawn and painted.” Or “Nope, it’s not sheets. There’s no messy cutting involved.” “Yes, about 80% profit – or more if you do it yourself, since material costs are low.”

It was fun but exhausting. Lots of interest – from both potential customers and licensees. Also, lots of really good thought-provoking questions and ideas to get this franchise/licensee business off and running. But we’re in it to win it! And make it a winner for all who join this great team.

How Did You Get All That Brick Up Here?