Summer slowdown? Nope! Not THIS gal! It’s been a couple of crazy months, and I’m just so glad I decided to exhibit in the Build Expo in Atlanta in July. The show was just filled with people looking to do brick. Maybe my timing is good, and I know I have a great product/service.

Literally thousands of people stopped by to touch and feel TerryBRICK. Here’s a picture of my booth. We were just so busy, I 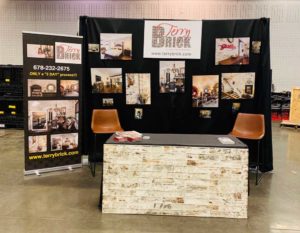 didn’t get a chance to take pics when the show was going on.

We collected hundreds of leads…and some good, serious ones too. We’re busy following up on those, and I hope to have some exciting news for ya’ll soon.

As usual, once people saw it, touched it, realized that it’s NOT some cookie-cutter template or stencil, but ACTUAL 3-D brick-like solid structure, they were thrilled. Wouldn’t you like to get a one-of-a-kind brick wall, at one-third the cost and small fraction of the labor and hassle of real brick? Yes? Well so would other people too. It’s a smart choice.

And…here’s the exciting news. At this show and the one we did in May, people asked whether we could do exterior as well. I’ve always had to say “no.” I hope soon to be able to say, “YES!” I’m working with another exhibitor I met at this show (a potential client hooked us up), and we’re in the planning stages of figuring out how to make TerryBRICK both interior AND exterior. Hopefully we’ll be doing some testing soon. That’s what I love about TerryBRICK. Supplies and cost are low – and my team and I have the experience to be able to test all sorts of variations on short notice.

How Did You Get All That Brick Up Here?